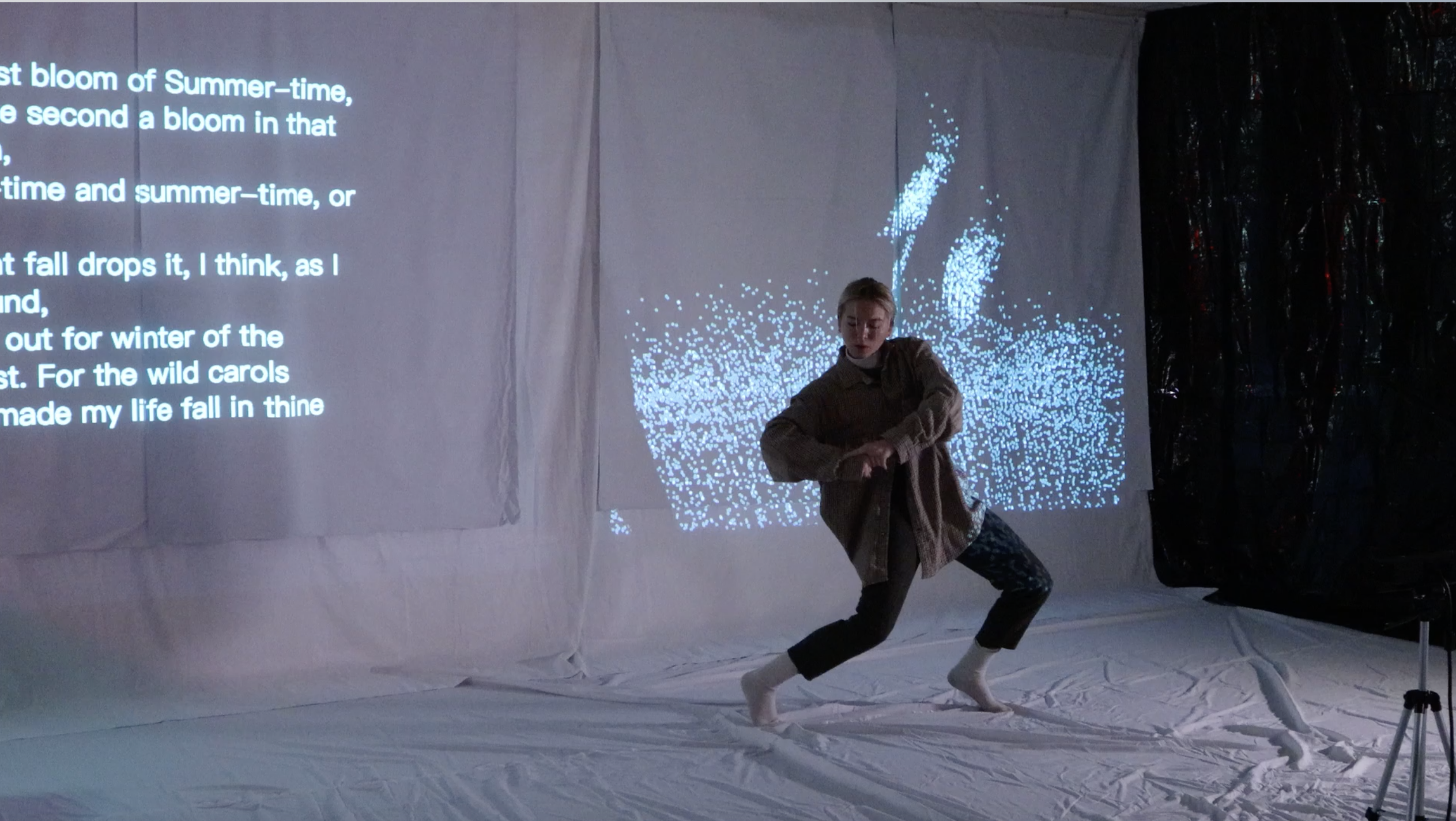 What is the aesthetics of AI? If AI/ML is poetic? With those questions, I have a strong interest in exploring the relationship between AI and art. AI acts as an extension of human’s consciousness, or as a tool, can they produce poetic and sensation of beauty?

In this piece, we choose AI generated text as the media to explore the harmony of human bodies, movement and nature colliding with digital environments. Language was never only words, never merely semiotic components, but also the driver of thought. The special material relationship with the imaginative world evoked by the text, produces human intelligible meanings. AI generated text reminds us of the changes our bodies are undergoing reinscriptions and reinterpretation by intelligent machines working within networks that bind together our flesh with their electronic materiality. In the posthuman conjunction, bodies of texts and bodies of subjects evolve together in complex configurations that carry along the context of the past.

N. Katherine Hayles said, simulation does not necessarily mean that the processes running in a computer are artificial.The processes can be as “natural” as anything in the real world; they are artificial only in the sense that they run in an artificial medium. I think it should be called Digital Nature, which is a perspective of nature and humanity in the post ubiquitous computing era. Artificial intelligence constructs an environment, to anticipate the user’s interaction with it and in this sense to construct the user as well as the interface.

When the AI constructed environment takes literary and narrative form, potent possibilities arise from feedback loops, engaging with a range of sensory inputs, interacting with the cognitive creation of the imagined world. The Mindbody is engaged, not merely mind or body alone. This imaginative world the artifact creates with all its verbal, visual, acoustic, kinesthetic and functional properties. Technology embedded in every tool is an ideological bias, a predisposition to construct the world, to amplify one sense or skill or attitude. This is what Marshall McLuhan meant by his famous aphorism “the medium is the message”.

In this performance, AI language constructed an environment that invited the artist or audiences to engage and interact. Two AI models were trained to generate poetry and recognize specific movements. In the performance, generated poetries were triggered by the specific movements of the dancer. The dancer improvised the new movement based on her feelings and thought after she read the AI poetry. Then the improvised movement as input to generate new poetry again. The whole process was like a feedback loop. Body movement and language influence and reshape each other, as the input and output, presenting the cognition, perception and creativity of both human and machine.